I’M NOT A NICE GIRL!

The exhibition conceived for the spaces of the Bel Etage and for the Archive Dorothee and Konrad Fischer in K21 presents works by four first-generation Conceptual artists: Eleanor Antin, Lee Lozano, Adrian Piper, and Mierle Laderman Ukeles. To this day, their work deals with relevant sociopolitical and feminist themes, such as institutional critique, racism, identity and gender politics, as well as ecological issues.

The point of departure for the presentation is a series of documents that have rarely or never been shown before – letters, concepts, and photographs from the Archive Dorothee and Konrad Fischer which chronicle contacts between the internationally influential gallerist Konrad Fischer and Lucy R. Lippard, as well as women Conceptual artists from the late 1960s and early 1970s such as Eleanor Antin, Hanne Darboven, Agnes Denes, Adrian Piper, Lee Lozano, Charlotte Posenenske, and Alina Szapocznikow.

While separate rooms in the Bel Etage of the K21 are devoted to Eleanor Antin, Adrian Piper, and Mierle Laderman Ukeles, the work of Lee Lozano (1930-1999) will be on view in the Archive Dorothee and Konrad Fischer. On the basis of the investigated documents and works, it seemed suggestive in a number of respects to present Lee Lozano in the context of the Fischer Archive. On April, 3, 1969, in her Private Book 1 and in one of her Write-ups she conceptualized the idea for a “Konrad Fischer show piece”. Consistent with the aim of overcoming the separation between art and life, the political and the private, were her activities, who uncompromisingly demanded a revolution in all areas of life, putting it into practice personally with great consistency and relentless radicality in her “Life-Art Pieces.” Emerging from this attitude was her boycott of the New York art scene and her decision to boycott women.

In her “MANIFESTO FOR MAINTENANCE ART 1969! Proposal for an exhibition ‘Care’,” published in 1969, Mierle Laderman Ukeles (*1939) questions the value of everyday routine and maintenance work in our society: “After the revolution, who’s going to pick up the garbage on Monday morning?” In it she makes a distinction between two basic systems of human labor: developmental work and maintenance work. She links developmental work with conceptions of the avant-garde, individual creation, or progress. In contrast, unproductive maintenance work serves the continuous preservation, enablement, and protection of life itself, albeit without receiving the commensurate acknowledgment or appreciation from society. She therefore resolved to become a “maintenance artist,” to ‘perform’ her daily housework as maintenance work: “MY WORKING WILL BE THE WORK.”

Eleanor Antin (*1935) refers to herself as a passionate feminist whose work oscillates between Conceptual art, performance, photography, film, and theater. Repeatedly it is the artist’s own body and its representation in society – in association with questions about female identity and the politics of desire and sexuality– that serves as the point of departure for her artistic investigations. In this way, she expands Conceptual art to encompass a subjective, feminist perspective. In a letter sent in 1972, Eleanor Antin presented Konrad Fischer with concepts and drawings relating to her current works, which she grouped under the heading “Traditional Art”. In these works, she subjected traditional art-historical genres (painting, drawing, sculpture) to a renewed investigation, using performance to oppose the female body as an object of masculine desire through the reconquest of a feminist pictorial concept.

Beginning in 1967, Adrian Piper (*1948) can be seen as having devoted her works to the principles of Conceptual art, conceiving each – irrespective of the media employed – as the expression of a specific idea. And while her early Conceptual works for the most part follow abstract and systematic principles, a subject/object relationship is already implicit in them, hence already incorporating a personal (intuitive) mode of access for both artist and viewer. As an artist and a philosopher, she introduces political concerns and topics such as gender- and race-based discrimination, xenophobia, and complex issues of identity, into the vocabulary of Conceptual art. Adrian Piper understands art not solely as a field of research, but primarily as a medium of communication, one that mediates between artist and viewer, between (constructed) Self and Other, and at whose center stands the concept of the “indexical present” (Adrian Piper).

Katrin Mayer (*1974) has developed in dialogue with the curator Isabelle Malz a display for the archival material, exhibition spaces and accompanying publication. This artist, who lives in Berlin and Düsseldorf, focuses mainly on the realms between the art work and the exhibition. Her site-specific, installative works consistently reflect on feminist themes and historiographic lacunae, as well as on methods of presentation. For the arrangement of the materials she has developed a display form in paper entitled “Dotting the Voids – A Liminal Pieceness,” which takes up the principle of ‘boxing.’ The reference here is to the archival boxes of the Fischer Archive, a formal element that displays affinities with the formal structure used in Lee Lozano’s Write-Ups and her perforated paintings.

Presented under the motto “I’M NOT A NICE GIRL!” are four combative and pioneering women Conceptual artists. In the spirit of collective praxis, the public is invited to participate in a Reading Group in order to read and discuss selected texts by the artists. 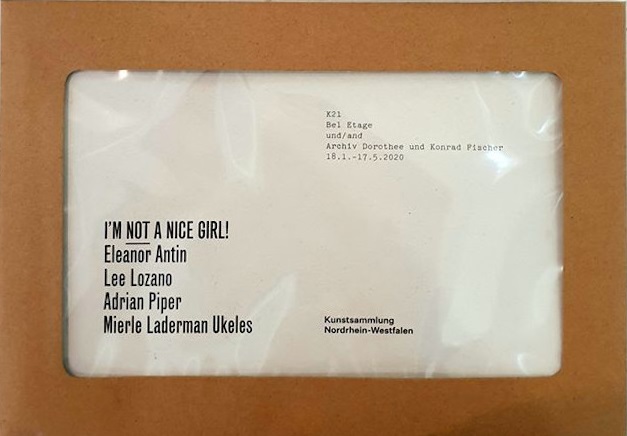 Card catalog for the exhibition

I’M NOT A NICE GIRL!

A card catalog has been published for the exhibition, which we also make available to you here as a pdf download.