The Exhibition in Minecraft

How to enter the Minecraft exhibition venue!
You will need the current Java Version (subject to charge).
Furter information: https://www.minecraft.net/

Enter the exhibtion in Minecraft!
Artworks have been put behind vitrines to prevent vandalism.

Shoshana Zuboff, The Age of Surveillance Capitalism: The Fight for a Human Future at the New Frontier of Power, 2018

With his context and research-based work, Simon Denny investigates how profoundly our perception and experience of culture is changed by the transformation of technology and politics. He examines the organizational structures, rhetoric, and visual language of high-tech companies, as well as the people behind them. Thanks to this ongoing interest, it becomes possible to understand how the mood towards the high-tech world has changed in recent years.

On the first floor of K21, the artist presents a group of new works developed for the MONA (Museum of Old and New Art) in Hobart, Australia, which have never before been shown in Europe. The focus is on extractive industry models, which mine both minerals from the earth and data, extrapolated from the labor we do on consumer apps and tools on the internet. The Australian mining industry provides a lens: as one of the most important sectors of the continent’s economy, it is, at the same time, also the cause of serious ecological and social problems. Simon Denny takes this as a starting point to reveal the connections between the mining of raw materials, data acquisition and processing, and climate change—topics that have acquired explosive topicality worldwide. His sculptures, wall works, and large-scale installations unpack the consequences of the development of the data economy and reveal extraction as one of the dominant principles in the way humans interact with their environment.

Deep interconnections between minerals, labor and data are not only made visible by Simon Denny but can also be experienced viscerally. At the center of the exhibition is a cage-like structure based on a controversial Amazon patent registered in 2016: A narrow cage with a robotic arm was developed to protect workers entering areas where robots controlled by algorithms are active. Inside Denny’s “Amazon Worker Cage” (2019), an avatar of an endangered bird appears in an augmented reality artwork similar to Pokémon Go. It evokes memories of the canaries used in mines to warn workers of the increasing concentration of toxic gases: If the sensitive animal died, humans had to take refuge immediately. The inconspicuous bird in the Amazon cage becomes a warning sign of even greater and uncertain dangers posed by humankind’s interaction with the environment.

The “Theme Park for Extraction” continues, as Denny makes use of the presentation forms of commercial trade fairs throughout the rest of the exhibition. The space is filled with large-format sculptures made of printed cardboard, replicas of machines for the contemporary mining industry. Their performance is presented in videos that demonstrate how extraction processes also penetrate today’s working world, which is increasingly based on the monitoring and evaluation of data. He has also developed a special set of courtroom sketches made with an Australian courtroom artist Sharon Gordon, based on speculative trials of the executives behind the mining companies who make and use the automated mining equipment featured in the exhibition.

As another connection between the extractive practices of mining and the increasing expansion of (and extraction from) the quantification of our activities online, Denny has also worked with artist Jan Berger to reproduce the entire K21 exhibition in the gaming platform Minecraft. In this virtual translation of the exhibition experience, the Minecraft version is constructed as if our exhibition spaces exist below the Zollverein Coal Mine Industrial Complex – the largest coal mine in the world during its active period.

The exhibition is accompanied by a catalog, a structural component of the sculptural units in the exhibition, that also serves as a board game. By building their own centralized data platform in Extractor, players reveal the mechanisms underlying digital capitalism. 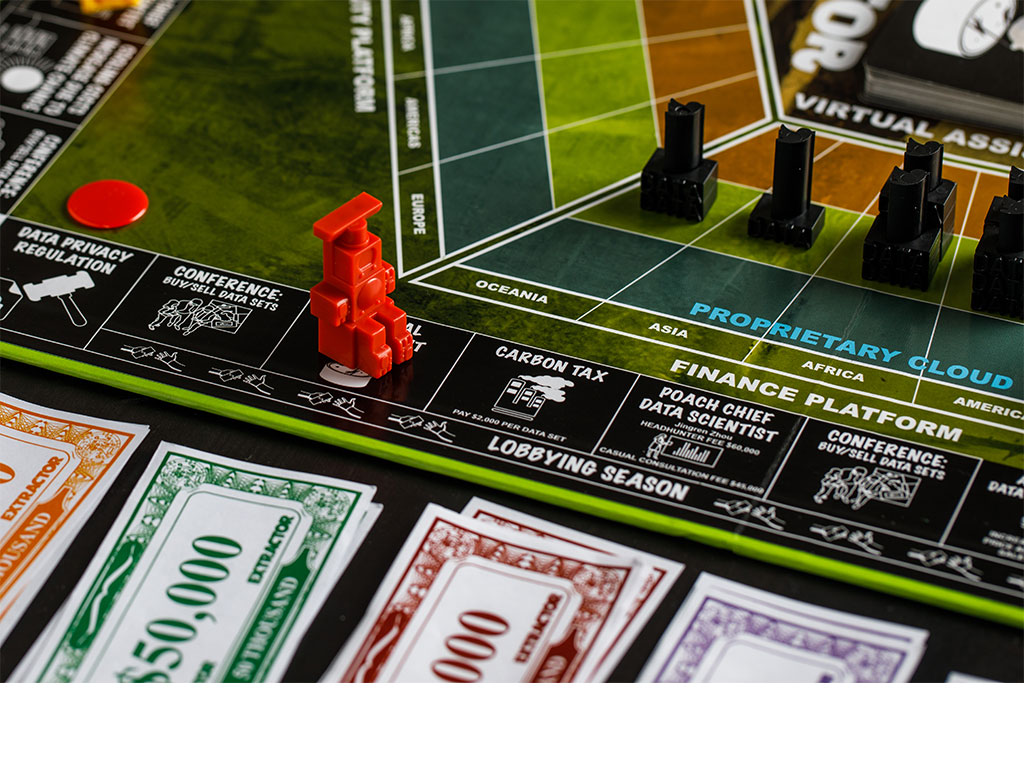 The exhibition is accompanied by a catalog, a structural component of the sculptural units in the exhibition that also serves as a board game. By building their own centralized data platform in “Extractor”, players reveal the mechanisms underlying digital capitalism. With instructions and essays by Tony Birch, Kate Crawford & Vladan Joler, Simon Denny, Boaz Levin & Vera Tollmann, Emma Pike, Jarrod Rawlins, Tiziana Terranova (German/Englisch). Published by Museum of Old and New Art, Hobart, Australia; German edition published by the Kunstsammlung Nordrhein-Westfalen, Düsseldorf.

As a result of the new protective measures to contain the corona pandemic, the Kunstsammlung Nordrhein-Westfalen in Düsseldorf remains closed through January 31, 2021.

We’ll be back soon!